Sunil Gupta, CEO, Yotta Infrastructure sat down with DCD to discuss the growth of Yotta, and the major trends in Indian data center growth 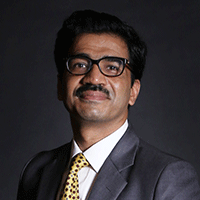 We sat down with Sunil Gupta, Managing Partner, and CEO at Yotta Infrastructure ahead of DCD>APAC Evolution to go into depth about data center growth in India, and in particular - how Yotta Infrastructure has managed their own rapid expansion. Yotta is a managed data center service provider, one of the largest in the APAC region and in India. As one of the leading providers of hyperscale infrastructure, Yotta has delivered truly innovative projects, providing unparalleled scalability, flexibility, and quality to its customers.

Sunil Gupta is known as the ‘data center man of India’. With over 15 data center builds, cloud and hosting infrastructure, and hyperscale experience under his belt, Gupta is revolutionizing the data center landscape in India. We wanted to find out how Yotta is tackling massive data center projects in India, what are the strengths and opportunities of their processes, and what challenges and barriers are they overcoming.

Data Centers in India: Through the looking glass

To understand Yotta’s place in India’s data center industry, Gupta said that you need to understand the history of the industry in India itself. The data center industry in India is roughly 20 years old. For most of its formative years, the industry was completely public sector and was privatized around 2005. At this time, approximately 80 percent of Indian websites were hosted elsewhere in places like the US. Why? Because the data centers and their power supply was unreliable.

This made many people cynical about setting up data center infrastructure in India. It was only once enterprise organizations realized the need to have this infrastructure in India did this begin to change. The thing that prompted this change in attitude was the unmatched growth of the Indian economy, quickly dwarfing that of its neighbors and bringing large investments into the country. Following this, the broadband, 4G, and data booms of the early 2010s coupled with quick adoption of cloud services seemingly created a market out of nowhere.

In 2015, the first major hyperscaler arrived in India. India was now too big a market to ignore.

After the first hyperscaler had set up shop in India, others quickly followed - most within just 12 months. Yet still, the demand in India even now is much higher than all the suppliers put together. Demand was so unprecedented that many were not prepared for what was to come. Current estimates place demand anywhere from 15-30 percent growth over the next 10 years for data usage. Everybody is still waiting in the wings to put up large scale data centers in India. In order to attract hyperscale clients you need to offer capacity, scalability, and construct campuses, not just buildings; this is where Yotta came in.

Register for sessions at DCD>APAC Evolution

All sessions are free-to-view. Book your sessions now to join 1,200+ of your peers when we broadcast live on 1-2 July!

There was a clear gap in the market, so Sunil, joined one of the leading real-estate and construction groups – The Hiranandani Group in their new venture that would facilitate the construction of new data center parks and ecosystems. Their first step was to utilize the Hiranandani Group’s real estate acumen to secure large parcels of land, the first step in offering infinite scalability to hyperscale clients. Sunil drew on experienced team members and brought them on board, allowing Yotta to hit the ground running.

Gupta’s aim was to demonstrate to clients that future growth is possible with Yotta, since scalability is at the core of the business. Real estate resources, construction and design capability, and power supply capability were all key in making Yotta an early success. One element of Yotta’s success is the ability to generate power on-site. This reduces PUE overall but passes cost-savings onto clients. Additionally, this also allows for the generation of chilled water, further reducing PUE and sustainability by being utilized within the data centers.

The driving forces behind Yotta’s design and approach to construction are to give clients unlimited scalability, high quality, and low prices. This was Yotta’s vision.

Ahead of the curve

India itself presents an opportunity to Yotta, and hyperscalers alike. Gupta mentions there are three main categories driving demand in India: consumers, enterprise, and new technology. As consumers use more and more data, the demand on data centers also increases. India is one of the world’s largest users of mobile phones, where a good smartphone can cost under $100 USD. This, combined with low cost of mobile data packages enabled users to consume services like video streaming, social media, e-commerce in masses.

This extended to enterprise and new technologies, which like most things in-market, are driven by consumer demand. Gupta also highlights how the digital-savvy Government of India pushes the importance of digital infrastructure, and utilized public and private clouds.

Furthermore, India’s relative position in the region may mean that like Singapore, neighboring countries may look to India as a key provider of infrastructure for the region. This may very well provide an opportunity for Yotta to support smaller operators and governments in the region to develop capacity.

Opportunities for change, from the ground up

As we’ve seen, Covid-19 has impacted daily life for consumers and businesses alike. Gupta says there may be real significant impact in India moving forward. He believes this will facilitate a total change in working environments. Many more people will work from home, and a hybrid mix of home and office work will become the norm.

He also mentions how this will put less of a focus on travel, as utilizing digital infrastructure to have online meetings and events has less cost and less impact on the environment. One example specific to data centers is the shift from captive data centers to managed data centers. Data Centers are classified as an essential service and were allowed to continue to operate even throughout the strictest lockdown periods in India. This was not the same for all captive data centers, many of which suffered faults due to lack of maintenance. The focus of many becomes the reliability and continuity of business, which caters directly to hyperscalers and small operators alike.

One element of Yotta’s DNA is its drive for excellence. Their dedication to achieving Tier IV certification from Uptime Institute demonstrates this. At its core, Tier IV is about fault tolerance, and you need to demonstrate results, not just tick-off boxes. The process of making every component fault-tolerant took many revisions, deliberations, and brainstorming sessions across multiple teams to generate ideas and solutions that are 100% fault-tolerant.

A specific example of this is the construction of 100% fireproof bus-ducts. This in itself is a feat, being able to withstand a fire for up to two hours without any impact on performance. Yotta had to take this one step further. They ensured that the components supporting the bus ducts were also fireproof. Further to this, Yotta realized that they also needed to be completely waterproof to prevent electrical faults as a result of sprinkler systems, so all components are IP66 compliant.

This level of construction had never been accomplished in India before and is part of the strategy that contributes to Yotta’s success. The durable design, with adaptable components, will be the standard across all of Yotta’s data center infrastructure.

Gupta took many learnings from the construction of Yotta’s first data park. In order to have success across all business units, you need to understand the key vision and apply the same principles in the design and construction process to finance, HR, marketing, etc. You also ended to be able to react to phenomena in the market and the wider world. Yotta plans out to completion from the outset, having a clear vision of the end goal and working towards it.

Another element of success is maintaining important relationships with all facets of the industry. Gupta ensures that fundamental thoughts and visions are continuously clarified and communicated so that all team members are communicators of the same message. Stability of structure and end to end optimization needs to be right from day one. Gupta was confident his product would be successful, and this translated into how they built the data center park.

The next big steps

For Gupta and the team at Yotta, Navi Mumbai, Chennai, and New Delhi are the next big projects. Three data parks are being planned and designed, all aiming to be delivered within the next 18-24 months. Gupta is confident his blueprint from previous projects will be imperative to the success of the project.

Gupta is also confident his relationships with specific vendors who understand the process will be able to deliver and implement both efficiently and effectively. Every single element of Yotta’s deliverables is made 100% clear from Day One. Governance across the board is pinned down to manage the process effectively.

“Whatever gets monitored gets controlled.”

Yotta is on track with some of the world’s most ambitious projects and hopes to change the landscape of the industry in India. The industry as a whole can take learnings from a region that is growing at an unfathomable rate.

You can hear more from Sunil at DCD>APAC Evolution, broadcasting globally on 1-2 July.