At the edge of space

When fiber and cellular coverage let you down, the answer could lie in a higher power

We’re used to thinking of the Edge as close to us. We see it as nearby and low-latency, with devices distributed across dense cities, found in our shops, embedded in our vehicles and nestled in our homes.

But the Edge is much larger than that. It stretches across the globe, with Internet of Things (IoT) devices inhabiting distant corners of the planet, cut off from any form of terrestrial connectivity. 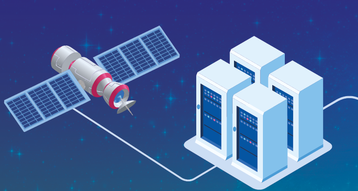 “Even today, if you look at the coverage of LTE and 4G - as well as 5G in the future - only about 20 percent of the landmass of the world is covered by those technologies,” Tim Last, VP & GM of IoT at satellite communications company Iridium, told DCD.

With some 80 percent uncovered, what is an IoT system to do if it has to connect to the wider world? To solve this challenge of connecting something remote, the solution lies even further away - in space.

“We're able to provide a fully global service, literally to any spot on the planet,” Last said, with sensors from mining, maritime, agritech and transportation all using Iridium.

"IoT is about a fifth of our business, but it’s the fastest growing segment. For six of the last seven years we've added more customers and more revenue each year through IoT services than we have on every other product on the Iridium network.”

The company, which is just finishing its ambitious $3bn satellite refresh, serves some 678,000 active IoT devices, up 26 percent year-over-year. “We've been doing IoT for about 12 years now and have about 400 partners that have developed different kinds of applications that use that technology and service different kinds of markets.”

But the satellite-IoT market, like the wider Edge market, is changing as more devices become connected, and more businesses move to the cloud.

“We’re about to formally launch CloudConnect, a product that we developed in collaboration with Amazon Web Services,” Last said. “They're the market leader and they happen to already have customers in their traditional IoT and cloud services, who expressed the need to connect remote assets.”

"This gives Microsoft some capability to plug the gaps in their Azure network where their customers cannot get direct access to cloud,” Tara MacLachlan, VP of Industrial IoT at Inmarsat, told DCD.

Both Iridium, with its 66 active satellites in low Earth orbit, and Inmarsat with its 13 satellites in geostationary orbit, offer various connectivity solutions that cost different amounts and require different hardware.

“Most of our IoT operates on short burst data (SPD), which is - as the name suggests - a sort of packet-based data-only service that operates over the lowest cost modems, transceivers that we're able to produce on our network,” Last said.

Even then, with the cost of data transfer and of the devices required to send the data, it is important to make efforts to only send exactly what is needed.

“Critically, from Inmarsat's perspective, it's about bringing that data together at an intelligent Edge point,” MacLachlan said. “It’s about really interrogating the data coming in, understanding what data points need to be transmitted and what doesn’t,” using a software-defined Intelligent Edge Gateway to pre-process data.

“This gateway tends to be a very small footprint piece of hardware,” MacLachlan said. “The hardware supports all of that Edge intelligence and the connection,” generally using connection types such as Low Range Wide Area Network (LoRaWAN), Bluetooth Low Energy (BLE) and Ethernet to connect to the multiple Edge devices and IoT sensors in an area, sending back only a small amount.

"Some point of aggregation on the ground makes sense for those companies," Dr Alex Grant, CEO of startup Myriota, told DCD. "That kind of satellite technology is more expensive, the hardware is more expensive, and it typically requires more power."

His company hopes to offer a cheaper alternative - a small system that can last a decade on a single set of batteries, and can send data straight to the satellite. "That direct-to-orbit architecture is nice, because you then don't have an on ground network planning exercise to do," Grant said.

The company uses four satellites from maritime data services provider and Myriota investor exactEarth, with the aim of connecting millions of small systems that send tiny amounts of data. Grant said: "We can send data starting at as low as 20 bytes. It's quite granular - if you just need to send a very short message, you can do that using a very, very low amount of battery power and away you go."

Currently ramping from pilot tests to full commercial deployments, Myriota hopes to address a wider range of smaller IoT systems that Iridium and Inmarsat's more heavy-duty networks may be too expensive to use. "You have different technologies for different use cases," Grant said, envisioning a scenario where farmers may want to “track a herd of 50,000 cattle, with a tiny little thing on each one.”

With the cost to access space falling rapidly thanks to SpaceX and the rise of smallsats, a number of newcomers are racing to compete for the burgeoning IoT market, hoping to undercut the incumbent providers. "These kinds of networks are a good fit for the very low cost use cases and the customers that don't actually need to pay for low latency," Last said.

With a new satellite network and a growing business, Last is confident about Iridium’s future. "I mean, that's not the case for many of our competitors: Inmarsat have virtually had to take themselves private in order to get out of the spotlight because their results have been pretty crappy.

“Globalstar is trying to sell itself for the spectrum, Orbcomm has basically gone into the cellular business because they decided they didn't want to do satellite much more.”

These fighting words come as space, like the Edge, is set to become a lot more crowded, pushing various untested business models to their limit. Last said: “Satellite's tough, but if you've got the right set of people and the right vision and strategy, you can make it work."