The last mile: At the Edge with drone delivery

How drones and last-mile delivery interact with the Edge 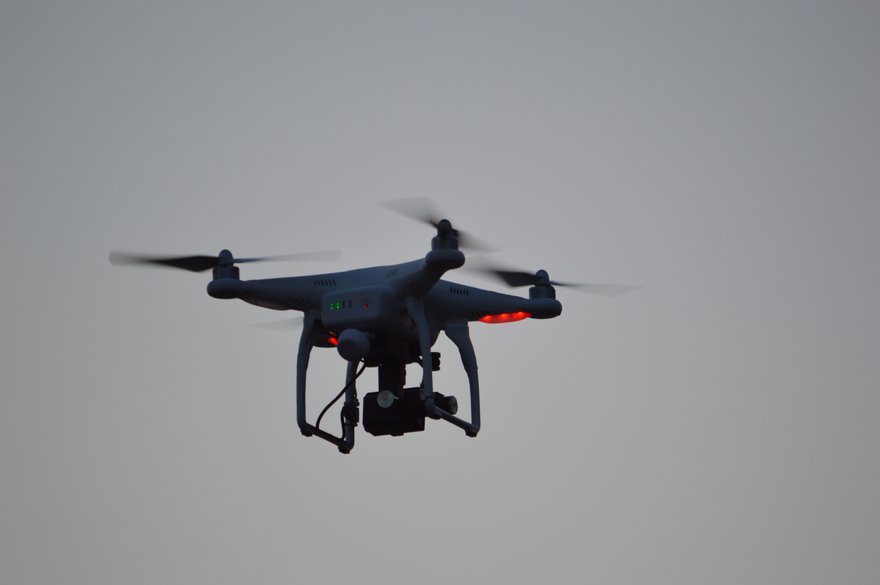 While the use of robotics and Edge computing for the likes of machine vision is becoming increasingly common within the confines of retail stores and distribution warehouses, the machines are also coming to your front door. Luckily they’re usually bearing gifts like cups of coffee.

Autonomous last-mile delivery – whether via terrestrial wheeled robots or aerially via drones (aka Unmanned Aerial Vehicles, or UAVs) – are predicted to be a major growth industry in the coming years, with household names in the eCommerce and logistics spaces getting in on the action.

Creating the necessary compute and connectivity conditions for robots in a controlled store or warehouse is relatively easy, but is the wider Edge infrastructure ecosystem ready for the household arrival of packages delivered autonomously from the sky?

Shopping for the retail Edge solution

Far from a future use case, drone delivery is actively being tested by a host of major names.

According to Emergen Research, the drone delivery market will reach $18.65 billion by 2028. Established delivery giants FedEx, UPS, and DHL are exploring drone delivery, as are startups including Matternet, Zipline, Flytrex, Flirtey, and Wingcopter.

Cloud giants with large infrastructure footprints to both train and communicate with drones are also interested in the space. This year saw Amazon announce that Lockeford, California will be “among the first” locations in the US getting access to the company’s Prime Air drone delivery service. In March 2022, Google’s parent company Alphabet announced its drone delivery service Wing had reached 200,000 commercial deliveries.

Most drone delivery operations are still restricted to a geographically small area while trials are ongoing and regulations catch up. But, from a hardware point of view, UAVs are a relatively mature technology; on-board compute modules are able to do at least basic collision detection & avoidance and autonomous route planning, even on simple consumer devices.

When it comes to on-board compute and connectivity for commercial operations above the general public, redundancy and safety are key considerations, according to Alan Hicks, CTO of Dublin-based Manna Drone, says. “Because we're flying over people, we need to be obviously highly redundant. On our craft at the moment, we've got eight motors, two motors on each arm so if we lose a motor we can still fly.

Founded in 2018, the company operates a drone delivery service in Ireland using its customized Manna drones. Following a trial phase in Moneygall, a small village on the border of counties Offaly and Tipperary, delivering medical supplies and groceries to the elderly isolating during Covid-19, the company is now running a delivery operation in Balbriggan, a suburb of Dublin home to around 40,000 people. The drones are currently able to carry a payload weighing up to 2kg. 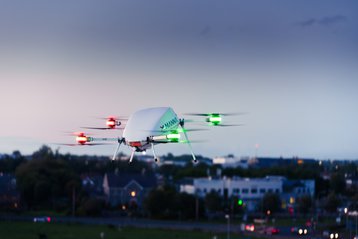 While it’s not a rugged server in the traditional sense, Manna drones are designed and customized to be ‘workhorses’ with high flight time (one might even say uptime) and high redundancy.

“At this moment in time in the world, you can't just go out and buy a reliable aircraft. The drones that are used for non-critical items like delivery, they're just not built to the same spec. They don't have the same level of redundancy.

“A typical drone that you would buy for either hobby or even doing inspections and things like that, might fly for a few hours a month. Our aircrafts are flying up to 12 hours a day, it’s a different level in terms of what they need to operate at. And they need to be kind of workhorses.”

The drones have four on-board compute modules that do different levels of processing for flight control and LiDAR sensors.

“Compute is definitely not a blocker for us,” says Hick. “At the moment, there's not a very high level of processing needed – we have a LiDAR sensor but we don't build a full point cloud and it’s low-compute – and it's more about reliability, which is why we have so many modules.”

Currently, the company is a heavy user of AWS for all of its non-aircraft operations. As is common with most AI use cases, machine learning models for things like collision avoidance are trained in the cloud and a smaller agent is placed on the drone itself once trained.

“There are two kinds of collision avoidance: Strategic deconfliction, which is you pre-plan your flight strategically based on the known snapshot of the sky. And then there's tactical deconfliction which is essentially on-board or very close to on-board and real-time reaction, for example, if a bird flies into it, or a drone that isn't registered, or is somewhere it shouldn't be.

“We do a lot in the cloud, particularly in terms of route planning and route optimization, because they tend to be bigger calculations that we do off-board, and so we can strategically deconflict all of the aircraft that are in the sky.”

As the company rolls out its services more widely, Hicks acknowledges the company may have to roll out more infrastructure in different locations to ensure low latency communications, but still envisions the company remaining in the cloud.

“For latency, we will definitely have a local regional instance for each area because we want to cut down the latency where possible,” said Hicks. “At a country level would be fine, certainly initially, and then we [might] have to go further.” 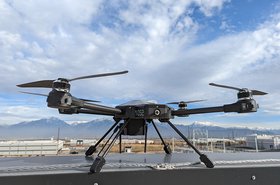 Drones at (and even in) a data center

Do today’s mega-campuses need aerial security as much as human patrols?

While Hicks says the company isn’t relying on 5G, the wider roll-out of the technology could help with network management, and in the future potentially change the equation around on-board and off-board processing.

“4G is sufficient for what we need today, but 5G would obviously open up a lot more potential for us, just in terms of dedicated bandwidth, and managing the network will be a lot more straightforward over the 5G network,” he says. “

We love doing things on board because it de-risks things. But, 5G might make comms ultra-reliable, which means we can move some of the compute off. Some of what we do needs to be based on where we're going to be flying the drones and if they've got the infrastructure to support what we want to do, we can always pivot a little bit.

“It's not a blocker for the industry at the moment, but the faster it becomes the norm, the faster we can move where we do our computing. "If you have 100 percent reliable comms, you can do it off-board because you know you can react fast enough [to potential collisions events] because the sensors are good enough that they can pick up aircraft quite far away. ”

The Edge might be ready, but regulation & air traffic control are still in development

While the company is currently within the confines of its Dublin suburb, it aims to expand across Ireland and into the rest of Europe and the US by 2023.

The company is currently limited in its operational area by the fact drone operators are required to have a visual line of sight (VLOS) with the machines at all times, even though they are flying autonomously.

Though moving to allow UAVs to fly Beyond Visual Line of Sight (BVLOS) has been high on the agenda of drone operators for years, regulators have still been slow to make the change, though trials to allow this are being conducted.

Another aspect that needs solving – that will be a combination of regulations, commercial cooperation, and technical competence – is air traffic control for drones.

“One of the things that hasn't been fully solved yet in the drone world is how that airspace management is going to work. And there are lots of companies working together to figure out that problem and to do it in an equitable way and in a federated way.”

Though many companies will have internal tools – known as Unmanned Aircraft System Traffic Management (UTM) – to manage their own operations, the industry and regulators are yet to agree on a common system that can span a whole country with multiple parties.

While current air traffic control is largely predictable and something that can involve people to accommodate short notice flights or diversions, a future where there are potentially thousands of drones flying short distances at regular intervals – Hicks says most of Manna’s flights last around three minutes – means a more automated system needs to be developed.

“The volume that can be pushed through is going to require full automation. With drone-based inspections at a wind farm etc, routes can be pre-planned three or four weeks in advance, and that route can be plugged in via a very similar way to how manned aviation is done.

“But the reality of drone delivery is somebody places an order, and three minutes later they're getting their delivery. You can't pre-book that flight, you can’t pre-flight plan when it's such a short duration.”

The FAA currently maintains nearly two dozen Air Route Traffic Control Centers (ARTCC) across the US that provide air traffic control services to manned flights. It’s still unclear how a wider automated UTM system would play out, but it would likely also require a central compute cluster controlled by the regulating authority and a number of regional Edge nodes to maintain order in the skies.

On the human side, Hicks seems confident people are ready to accept drones once they see their usefulness. Despite the often negative headlines around drones – scare stories about drones at airports are regular tabloid fodder – he says people can acclimatize to drones remarkably quickly once they are in operation in an area. “A few weeks after we're in a town, it's just normal, and people don't look up and it just becomes part of daily life. It becomes boring, which is the way we like it.”