And when will we really need it?

Whenever we talk about low latency these days, we inevitably talk about the Edge.

Edge computing was predicted to take over, with the expectation that technology reliant on low latency would quickly become the norm, such as self-driving cars, AI, and IoT.

But the pandemic put a pretty heft spanner in the works. The entire human population went into survival mode - and that included service providers. It wasn’t the time to explore the Edge, it was the time to focus funds on core facilities to make sure people had access to low-latency connectivity when they needed it more than ever.

But with the pandemic slowly fizzling out, or at the very least becoming part of the background noise of living today, a discussion surrounding the hyperscale Edge can break its way back into our consciousness.

At our recent DCD>Connect Silicon Valley event, we were lucky enough to sit down with a panel and discuss what the hyperscale Edge will look like, and why we need it.

What became immediately apparent, however, was that there was not a unanimous opinion between our panelists on whether the Edge event exists at all.

Yuval Bachar, founder, and CEO of EdgeCloudLink dubbed what we currently think of as the Edge, as little more than an extension of the cloud. 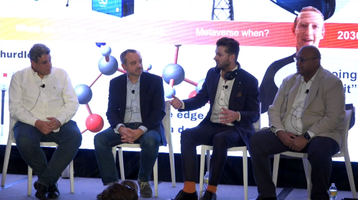 “We don't see what's driving it right now,” said Bachar. “There wasn't an app that said I have to have this low latency high bandwidth environment to survive. And that is, in my opinion, part of the reason that it [the move to Edge] was slowing down. Because nobody came and said I will make billions of dollars out of an app that will work only in Edge locations.

“What we're seeing instead is that the more standard apps like video streaming or uploading of video clips or anything like that are actually dominating the Edge right now. And when they don't have the Edge, the solutions that they’re looking for are completely different, because they're not sensitive to latency. There's no critical app that came in and said, without this, I cannot survive.”

We return therefore to that survival instinct - a reminder that in so many ways technology evolves in a very similar way to that of the natural world. As circumstances change, we must adapt to exist within them. So, is it as simple as that the circumstances haven’t rendered a true Edge necessary just yet?

“A lot of speculation is that gamers are going to be the first ones that are going to drive this because gamers are usually the ones sitting on the bleeding edge of technology. They want to enjoy a zero-latency environment, which is very different from what they have right now,” Bachar said.

“But the gamers don't have enough force at the sites of the carriers to force them to make investments in the Edge. If you look at the investment that has been done in the core, tens of billions of dollars of IT equipment has been placed in the cloud core by the main three cloud providers. They would need a really strong justification to do it again at the Edge, and right now it's very difficult for them to monetize.”

"Realistically the Edge, the way it is right now, is just an extension of the cloud. It's not really the Edge that everybody talks about" Yuval Bachar

So, what does that leave the Edge looking like in reality?

“You can't achieve the 5G latency that was promised to be in the safe sub-ten/sub-five millisecond. So, realistically the Edge, the way it is right now, is just an extension of the cloud. It's not really the Edge that everybody talks about with extremely low latency and extremely high levels of bandwidth with high processing power at the endpoints.”

Wil Tirado, vice president of Global Carrier Engagement and Strategy at EdgeConneX, said in response: “We agree, and we disagree”.

There might be an agreement that the Edge does not currently look how we anticipated it to - but when it comes to drivers, Tirado sees a multitude of contributing factors.

“There are a number of things that are driving the Edge as we know it today.

“One of those things is data sovereignty: data has to be geographically where it's being used. That is only going to increase by virtue of the fact that you read the newspaper and it will have the latest hack that exposed so many millions of consumers' information. Governments want to have control, and the only way you can have control is by having that data geographically within your jurisdiction.”

“We're also seeing the fact that these cloud operations are getting bigger. I'm not a cloud designer, I'm a network designer, and with networks, you have a decision to make: Do I keep drawing in one single location or a number of locations?

“Conceptually, the cloud could be in one location, and you get all your resources from there. Because you don't pay more to use the cloud wherever it is as a consumer, as a business you might, but as a consumer, you don't.

“Let's talk about CDN or streaming video. We understand that you don't care where that video is coming from; you don't pay more to download a given movie. But the streaming company pays more to send that bandwidth. They pay more when they're sending traffic, or they have to build bigger pipes. That is driving people to build closer to users.”

So, the cost is a huge factor. And while we may not be achieving the low latency expected, as said by Bachar, latency does still have an impact.

Conference Session Major Panel: What will the hyperscale edge look like and why do we need it?

Kam Patel, vice president of Data Center Market Development at CommScope pointed out that even in colocation sites, this idea of location equalling lower-latency is present, with prime space being the cages closest to where the information is coming from.

“Speed kills. So obviously, most of the data centers that are hyperscalers have access to the highest speed and the highest bandwidth applications first, and then it trickles on. So there's some advantage to working in the cloud for that reason,” said Patel.

“But cables only provide so much latency, it's actually coming from the hopping from equipment to equipment. So what we're doing within these data centers is when we get to 400G, or 800G, it's actually a disaggregation.”

“So today, when you think of a cloud data center, a lot of it's driven by top-of-rack switches, and you connect many servers to it, so if you pass that server bank to get to the next level, you actually have to go up one and come back down, and that causes latency.

So, when will we really - and I mean desperately, can’t live without - need the hyperscale Edge? Currently, it is hard to say. It seems that, like with everything else, it will be a change that continues to happen gradually, and eventually will happen all at once.

Tune into the episode on demand for a deeper look