Frankfurt's plan to limit data center building to specific areas has come in for criticism from the German Datacenter Association (GDA).

The plan, reported this week, would limit data center developments to certain neighborhoods, and implement a district heating plan. The GDA has complained that it was not consulted on the plan, and the areas zoned for data centers will fill up in the next five years. At this point, the group says a lack of further data center development in the city will weaken Frankfurt as a location for business. 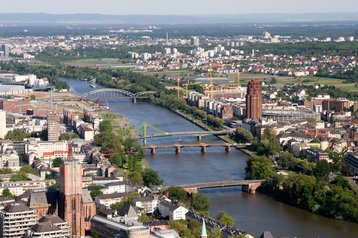 Far from curtailing the sector, politicians should be helping it, the GDA said.

“We see the risk that the concept adopted by the magistrate will noticeably weaken Frankfurt as a digital and business location in the long term," said GDA chairwoman Anna Klaft. GDA wants to support sustainable data centers, but the City's plan is too restrictive, and will limit digitization, she said in a release from the GDA.

In May 2021, Frankfurt announced it would produce a new plan for commercial development which would include requirements for data centers, in response to concerns that data centers had taken up 64 hectares (640,000 sqm/6.9 million sq ft) in Frankfurt, and were pushing up property prices, as well as using available energy. A magistrate's report had suggested facilities should be built taller to take up less space, and share their waste heat.

This week, the City's development plan was reported, which includes a requirement to certify "company-independent data centers" (cloud and colo facilities), and limit them to the neighborhoods of Sossenheim, Rödelheim, Griesheim, Gallus, Ostend, Fechenheim, and Seckbach.

Klaft said these areas are not enough for the data center sector's needs, and claimed to have been left out of discussions: "Despite the city's promises, there was not sufficient exchange with the industry in advance that could have contributed to sustainable and needs-based planning. The areas currently designated, not all of which are fully suitable for data centers, will be exhausted with the construction projects planned and approved to date by around 2025."

She went on: "Further expansion in line with the German digitization goals is then difficult to achieve in Frankfurt. We, therefore, expect an increasing number of new data centers to be established in the surrounding communities in the Rhine-Main area in the long term."

Klaft says that data centers are the basis for the digitization of society, and the sector is already focused on sustainability and ready to cooperate.

"As the voice of data center operators in Germany, we continue to emphatically support political decision-makers for framework conditions that enable sustainable, long-term growth and do not further jeopardize the competitiveness of Germany’s digital location.”

The plan should have consulted data center operators fully, she said: "In order for data centers to be able to make a positive contribution to the digital transformation and the achievement of climate goals in the future, politics must involve the operators earlier and more intensively, especially at the local level. We regret that this was not the case with the agreed master plan."

Instead of acting against data centers, politicians should help them said Klaft, arguing that data centers create "immense added value" for the German economy through digital applications, and "politicians must not lose sight of the competitiveness of the industry in Germany."

It's tough for data centers

Already, she says, Germany has "the highest electricity and construction costs in a European comparison," as well as "lengthy and complex approval procedures". Instead of more restrictions, she asked for "the removal of bureaucratic hurdles".

Frankfurt is a major European hub, with more than 60 data centers, the GDA says, which provide benefits across the Rhine-Main: "Data centers create long-term and future-proof jobs, support regional business and suppliers have noticeably upgraded commercial areas in the last 20 years through new use and billions in investments."

Far from crowding other businesses, data centers only use five percent of the commercial space in Frankfurt, from where they provide 70 percent of digital services throughout Germany, the GDA says.

The GDA also argues that data centers are good for the environment: "The industry wants to actively contribute to green digitization in close cooperation with politicians. The German climate goals can only be achieved with the help of accelerated digitization."

The Association and many of its members are in the Climate Neutral Data Center Pact, a group that is agreeing on voluntary self-regulation with the EU's directorates for technology and the environment.

"Operators are investing in green electricity, more efficient cooling, and modernization to further reduce emissions," the GDA says. "Above all, the current expansion of large cloud and colocation data centers improves efficiency, since this is accompanied by the dismantling of significantly less efficient, company-owned data centers."

On the subject of district heating, the GDA says it "would like to get involved constructively in the development of climate and heating concepts and show how data centers can make a positive contribution to climate protection. For example, the provision of waste heat often still fails due to insufficient grid expansion and a lack of customers. Better cooperation between municipalities, operators, and energy suppliers can remedy this and ensure that digitization and climate protection go hand in hand."