Cloud and IT company IBM plans to achieve net-zero greenhouse gas emissions by 2030.

IBM said that its target does not include the use of unbundled renewable energy certificates.

IBM will reduce its greenhouse gas emissions 65 percent by 2025 against base year 2010 - although it should be noted IBM was a larger company in 2010, and has since gone through several rounds of huge layoffs, and plans to spin off nearly half its company.

The business also plans to procure 75 percent of the electricity it consumes worldwide from renewable sources by 2025, and 90 percent by 2030. Larger cloud rival like Google already uses 100 percent renewable power at its data centers (via power purchase agreements), Amazon expects to do so by 2024, while Microsoft is aiming for 2025.

In a 2020 sustainability report, IBM said it has cut carbon emissions 39.7 percent since 2005 (when it was an even larger business) and that renewable energy sources accounted for 47 percent of its power in 2019.

"In 2019, 59 percent (81,000 MWh) of IBM’s energy conservation results came from our data centers, saving the company $9.1 million," the report states. "These projects included initiatives to refresh our IT infrastructure with more energy-efficient technology, increase system virtualization and utilization, and improve the cooling efficiency of our data centers." 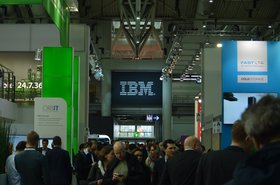 IBM also hopes to use "feasible technologies" such as carbon capture by 2030 to remove emissions "in an amount which equals or exceeds the level of IBM's residual emissions." Carbon capture is still a nascent technology industry, and it is not clear if cost-effective solutions will be reached in a decade. Both Microsoft and Amazon have announced for-profit investment initiatives in carbon capture technologies, while Elon Musk plans to launch a $100m Xprize.

While IBM joins a growing number of data center and cloud companies turning to renewable power, it is also among the many whose IT footprint is also offered to fossil fuel-extracting companies, helping lead to emissions far greater than their own direct impact.

In 2019, IBM built the world’s most powerful commercial supercomputer for Total. "Finding new oil reserves that can be profitably extracted is a top priority," IBM said at the time.

With the new pledge to be net-zero by 2030, IBM CEO Arvind Krishna said that "the climate crisis is one of the most pressing issues of our time. IBM's net-zero pledge is a bold step forward that strengthens our long-standing climate leadership and positions our company years ahead of the targets set out in the Paris Climate Agreement."