ByteDance has been marked down in Greenpeace East Asia's 2022 climate ranking of China's cloud providers and data center operators.

The TikTok owner came third from bottom in GreenpeaceEast Asia’s 2022 climate ranking of China’s cloud providers, with Tencent, Alibaba, and Baidu all well above it. In the data center sector, GDS came top, with Chindata in second place. 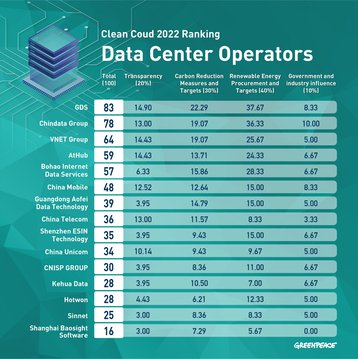 The report is Greenpeace's third annual analysis of renewable energy use in Chinese cloud companies.

“ByteDance is not keeping up with its peers in China when it comes to climate commitments and renewable energy use. To date, eight major tech companies in China have committed to achieving carbon neutrality by 2030, representing huge progress for the industry. Tech giants like Tencent and GDS have set ambitious targets and are starting to procure renewable energy at scale, but ByteDance has not even disclosed the greenhouse gas emissions from its own operations,” said Greenpeace East Asia Climate and Energy Project Manager Ruiqi Ye, based in Beijing.

As Ruiqi Ye says, this is progress, but it comes against a poor track record. In 2020, Greenpeace criticized Chinese cloud players for reliance on coal power, and the following year said the local providers were continuing to burn coal and shunning any moves to transparency. Later that year, Greenpeace warned that China's data centers would double their emissions by 2035, largely because uncontrolled growth in capacity is not matched by a growth in renewable energy use.

Against that background, renewable energy use is still low, with the data center rankings led by GDS, which has 30 percent renewables in its mix. Tencent, Alibaba, and Baidu lead the cloud providers' listings in part due to buying more renewable energy.

Eight major Chinese tech companies have now committed to achieving carbon neutrality (Scope 1 and Scope 2) by 2030, compared with only one (Chindata) in April 2021. Six of the companies in the listings have promised to achieve 100 percent renewable energy use by 2030, which again is an improvement over 2021 when only Chindata had made that commitment. Tencent, Alibaba, and Chindata Group executed record trading of green power over the past year. 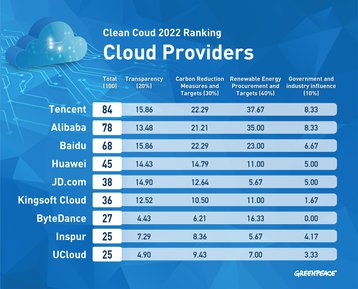 It's worth noting that Chindata reported 51 percent renewable energy in 2021, but this appears to have fallen back this year - perhaps because it has outgrown the availability of renewable power in its areas, or perhaps because of gaps in the public data used by Greenpeace.

On Scope 3 emissions, things are worse. Scope 3 emissions measure the greenhouse gas output of a company's supply chain, and represent a more realistic estimate of its environmental impact - yet Tencent is the only company to include supply chain emissions (Scope 3) in its carbon neutrality pledge, Eighty percent of the companies ranked have not disclosed Scope 3 emisisons at all.

Greenpeace wants China’s tech companies to all promise to get to 100 percent renewable energy use and carbon neutrality (Scope 1-3) by 2030. "Companies must scale up procurement of wind and solar energy and actively disclose environmental data," the company said in the report.

“When companies set carbon neutrality targets it’s critical that their entire supply chain is included, not just their own operations. In addition, companies should focus on direct procurement methods such as green power trading and constructing wind and solar power plants. Carbon offsets are not a substitute for direct emissions cuts and should not serve as an excuse for continued fossil fuel reliance,” said Ye.