How long till Loudoun demands microgrid power for data centers?

You know that data centers are facing criticism when the world's biggest data center hub starts to rein in future development.

This week, Loudoun County's Transport and Land Use Committee (TLUC) issued a set of proposed new rules, which would limit data center building in certain areas, and apply new restrictions to what can be built in other places.

That's a big deal, because Loudoun holds the world's largest aggregation of data centers (at Ashburn), and the County gets more than 30 percent of its tax revenue from taxes on their servers. Developers want proximity - to Ashburn's fiber routes, but also to each other. And till now, nothing has stood in their way, with "by-right" approval for projects in most areas. 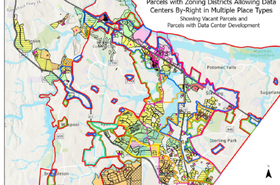 In all honesty, this won't massively change what data center developers can do. The changes are designed to correct a situation where developers could have automatic "by-right" approval for developments beyond what the infrastructure can handle. This is particularly true along Route 7, where any new developments would require new overhead power lines, against the wishes of residents. Elsewhere in Loudoun, new overhead power lines have led to extended battles with local protesters.

While data centers won't have "by-right" approval for data centers in suburban areas anymore, there are still areas zoned for industrial use where developments can go through on the nod, and developments in other areas will have to meet stronger environmental rules.

Developers who have banked suburban land expecting to build data centers on it won't suddenly find the projects are rejected. They paid up to $2 million per acre for the land, and Loudoun's authorities do not want to alienate giants who pay big equipment taxes, even after generous rebates on property taxes have lured them in.

A report from the Northern Virginia Technology Council (NVTC) says data centers have a 13.2 fiscal impact ratio - which means they $13.20 in tax for every $1.00 of public services they use. That figure is probably still a strong one, even if we tweak it down a bit, given it comes from NVTC, a tech lobbying group, using figures from Loudoun's notably pro-data center Department of Economic Development. Data center builders Digital Realty, Microsoft, and CloudHQ have all sponsored NVTC reports on the economic impact of their projects.

Quibbling aside, there's no doubt that, by amassing vast amounts of data center capacity, Loudoun is able to gather taxes on global businesses, to fund good local schools and services for its small population.

As Loudoun reaches capacity, nearby areas including Prince William County, Fairfax, Fauquier, Warren County, and Manassas have all made a pitch and begun to see data centers arriving. Even the South of Virginia is getting some overflow capacity, particularly Virginia Beach with its cable landing station.

But we're also seeing protests., with Prince William residents complaining about "catastrophic noise," and Manassas people objecting to developments on a historic battlefield. Data centers in the area have had to demonstrate they don't drink too much or make too much noise, and one County (Fairfax) has complained about developments in another (Prince William).

It's a long way from the places which have been forced to reduce or temporarily ban on data center development, like Dublin, Ireland, Amsterdam, and Singapore. These are locations where power is genuinely (or apparently) in short supply, or where data centers would use up renewable energy and make it impossible for the nation to meet renewable targets.

Are microgrids the answer?

With the human race desperately needing to cut emissions, data centers are often seen as one energy user that can be curbed.

The sector might argue that it is absolutely necessary. Zoom saved us during the pandemic, we are told. Micro energy savings from the Internet of Things, aggregated through the (normally wasteful) Blockchain protocol will magically add up to enough to balance the energy books, and make data centers a net benefit.

But everyone knows that most of what happens in data centers is not strictly necessary. It is instead a lot of needless online activity, much of it coded wastefully and funded by adverts that merely add to the energy burden

In Ireland, Amsterdam, and Singapore, along with other urban sites, data centers are having to improve their public image, and it's striking that all have come up with rules to limit energy use.

In Ireland and Singapore, there are proposals to ask data centers to make a contribution to the grid. In Dublin, Microsoft is considering sharing some UPS power with the grid, while in Finland it is locating a data center by a district heating system.

Singapore's post-moratorium data center pilots will have to be good energy consumers, with the country asking them to consider measures like hydrogen power and solar cells. In Ireland, data centers must also generate their own power.

Loudoun County is a long way from this, but at some point it will reach energy capacity. I wouldn't be surprised to see on-site power coming into some data center proposals there in the next few years.