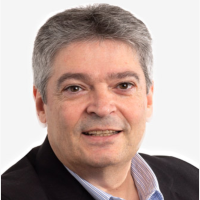 Enzo Greco is Chief Strategy Officer for Nlyte Software, where he has responsibility for setting Nlyte’s strategy and direction based on market trends and dynamics, partnerships and adjacent markets.

He has deep knowledge of software and the Data Center market; his current focus is on Colocation Providers, Hybrid Cloud implementations and applying Analytics overall to Critical Infrastructure, Data Center and Application Performance Management markets.

Most recently, Enzo was the VP and GM for Software within Emerson Network Power, where he was responsible for the entire Data Center software portfolio, from strategy to development to deployment. While at Emerson, he aggressively repositioned the portfolio and strategy, and led the transition efforts for Software as Emerson Network Power was sold to Platinum Equity.

Enzo started his career at AT&T Bell Laboratories, where he was part of the software research group and one of the original founders of the TUXEDO System, an enterprise grade transaction processing system; he received a fellowship for this work.

After AT&T Bell Laboratories, Enzo transitioned to Wall Street where he ran a software market and strategy consultancy with blue-chip clients ranging from Goldman Sachs to AIG. During this period, he founded several companies, the largest of which, Planetworks, was acquired by IBM in April, 1999.

Enzo then worked in IBM’s headquarters for 14 years, where he was heavily involved in IBM’s entering and growing several key markets, including Portal, Business Process Management and Smarter Commerce.

Enzo has a BS from Manhattan College in Riverdale, NY and an MS from Stanford University in Stanford, CA.