As in Dublin, Singapore, Amsterdam and Frankfurt, digital developments in London could face opposition

London has a housing crisis. There are plenty of jobs in the capital, but housebuilding has not kept up.

It also fuels homelessness: the city has 11,000 homeless people on its streets, and 60,000 homeless households in temporary accommodation provided by councils (including more than 84,000 children). There are also a lot of "concealed households" - around nine percent of households contain people who cannot afford to move out. 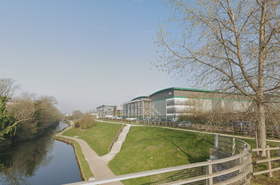 All the electricity capacity is already used up, GLA tells developers

According to the Greater London Authority (GLA), data centers are going to be exacerbating this problem.

The only way to solve the housing crisis is more homes. The GLA has a housing plan, in which London Mayor Sadiq Khan proposes some 650,000 homes will be built in the capital over the next ten years. This week, news emerged that could derail that plan: the GLA wrote to developers in three London boroughs jointly responsible for 11 percent of London's new accommodation, warning them that housebuilding there will come to a screeching halt, with no new applications likely to be approved in the next ten years.

Each data center uses as much electricity as many thousands of homes, and they have been popping up at a breakneck speed along the M4 motorway and around Heathrow airport. In Hillingdon, Ealing, and Hounslow, this voracious appetite means there is simply no electrical power left for other new connections until 2035, the GLA has said.

Recent developments there include Virtus' Stockley Park campus, which opened three years ago with four data centers, an Ark Data Centres development in Park Royal, as well as numerous facilities around Heathrow.

We've seen this before

DCD readers will be familiar with this story. In large cities round the world. the demands of data centers for power and land have sparked protests, development bans, and eventual regulations on what facilities can be built.

In Dublin, there is an effective moratorium on new data centers. The Government said today that new data centers were essential to Ireland's development, and would proceed with certain conditions, possibly including on-site power generation - but DCD is pretty sure that developments in Dublin itself will find it very difficult to get approval in the next few years. With 14 percent of the country's power going into data centers, Ireland cannot meet its commitments to decarbonize without limits being set.

In Singapore, a three-year moratorium is being lifted, with strict limitations on the total amount of capacity which can be built, along with strictures on efficiency and a request for data centers to bring extra power capacity with them. The country has very little renewable energy and a shortage of land.

In Amsterdam, a one-year moratorium ended recently, with tough regulations and requirements for data centers to consider heat reuse. Even so, the city is still concerned enough to attempt to push through regulations that would force colocation providers to regulate their tenants' servers.

Frankfurt, meanwhile, has put through regulations that will restrict data center building to specific areas.

Even in Northern Virginia, where wide open farmland spaces have been turned into the world's greatest concentration of data centers, there is a definite backlash, with data center development likely to be restricted to specific areas in Loudoun, and subject to noise restraints in Prince William. In Warrenton, residents want to block new powerlines that would be required by an Amazon facility.

London's Mayor Sadiq Khan believes that his housing plan is in big trouble. In his view, it needs help from the central Government.

However, we would point out to the Mayor that electricity demands are part of any planning application. So if the power has run out before the housing can get get built, then someone failed to do some basic arithmetic. It looks as if too many data centers were approved, or not enough power capacity was scheduled.

Whatever the details of this crisis, the government has been weak on the national housing problem.

In broad brush strokes, David Cameron's government promised 200,000 new starter homes in 2014, but actually delivered none at all, according to a National Audit Office report.

Local and National Government will have to address the urgent housing crisis - but should also give some certainties for data center developers.

Boris Johnson typically upped the ante, with big promises in 2019 to build a million new homes in five years, and reach a rate of 300,000 homes per year during the present decade. Unsurprisingly, these promises have been overlooked in the pandemic and the chaos of the Johnson administration.

Of the two candidates to succeed him, Rishi Sunak has promised to curtail development on greenbelt land, a proposal criticized as likely to hurt housebuilding. He is felt to be the more sensible candidate compared to Liz Truss, who wants to scrap the targets, and rely on the magic of "tax cuts and deregulation" which has served us so badly in the past.

These comments are a long way from addressing the specifics of West London, where a lack of power is apparently holding back development.

Sadiq Khan's office tells us that Government ministers have declined to discuss the problems of West London development with him: “Sadiq wrote to the Government weeks ago requesting a meeting to discuss electricity capacity in west London but the request was declined. In the midst of a housing crisis, he is calling on ministers to work with him to resolve this issue urgently."

We'd like to know where in central Government these issues might be thrashed out, and what the answers might be. We'd also like to know why this was a surprise - data center developments take time to gain planning permission, be built out, and hit full IT load. From the start, their maximum power demands are known by the authorities that approve them, so it should not have been a shock that they would max out power capacity and leave no room for more houses without further grid investment. Work on upgrades should have begun before facilities were greenlit.

Local and National Government will have to address the urgent housing crisis - and to do that they'll need to solve the power issue. In the process, they also have to give some certainties for data center developers.

At this moment, anyone wanting to build a data center in Central London will be eyeing Dublin, Amsterdam, Frankfurt and Singapore, and wondering whether their project might (and perhaps should) find itself sidelined in favor of housing.